The chips were down last night as we took on our friends at Collate Printers for another intense table tennis tournament. The Collate boys piled out of their black vans at 17:30, and into the Aspin table tennis arena (!!) on a mission to show us software types that printing ruled. Read on to see what happened next… First on the table was Aspin’s Harvey versus Collate’s Ade with Harvey winning his opening set for us. This set the pace for Aspin wins with Louis winning against Harrison, Richard beating Colin, Nathan successfully taking on Martin and Doug winning against Simon. Feeling undefeated, Collate presented us with Mark who fought back with an opening set win against Aspin’s Nigel. To finish this set, our Chris took the lead against Martin and Aspin finished looking a little smug. Collate knew they had to act fast to pull it back in the next set. 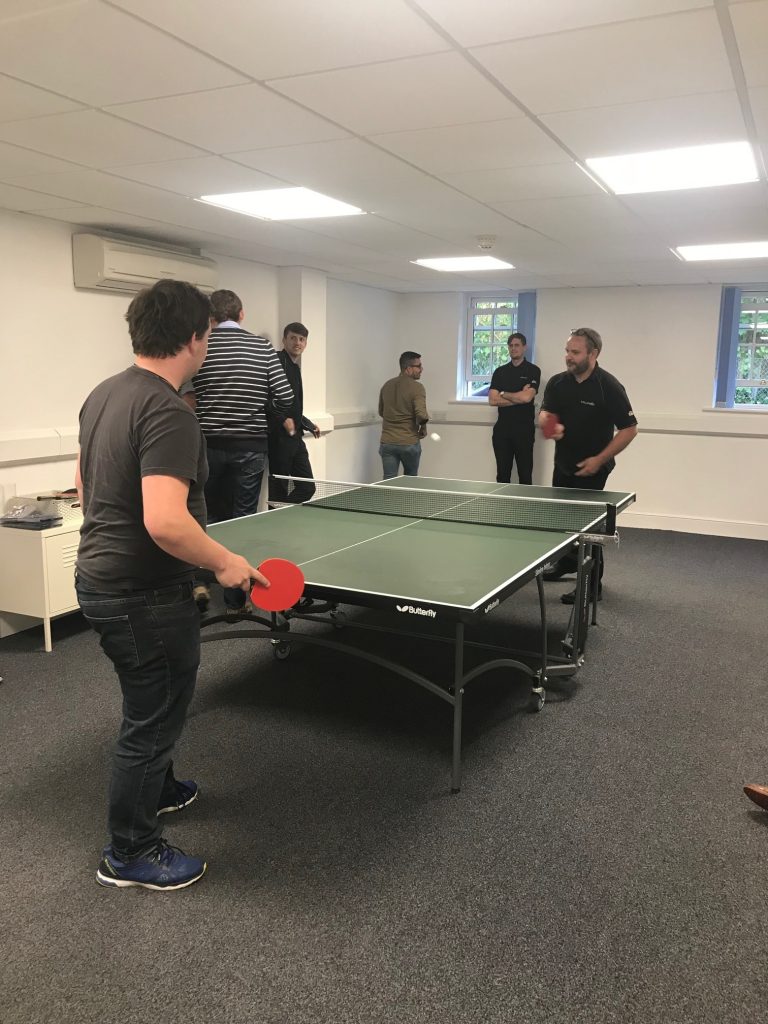 Harvey vs. Ade to get things started 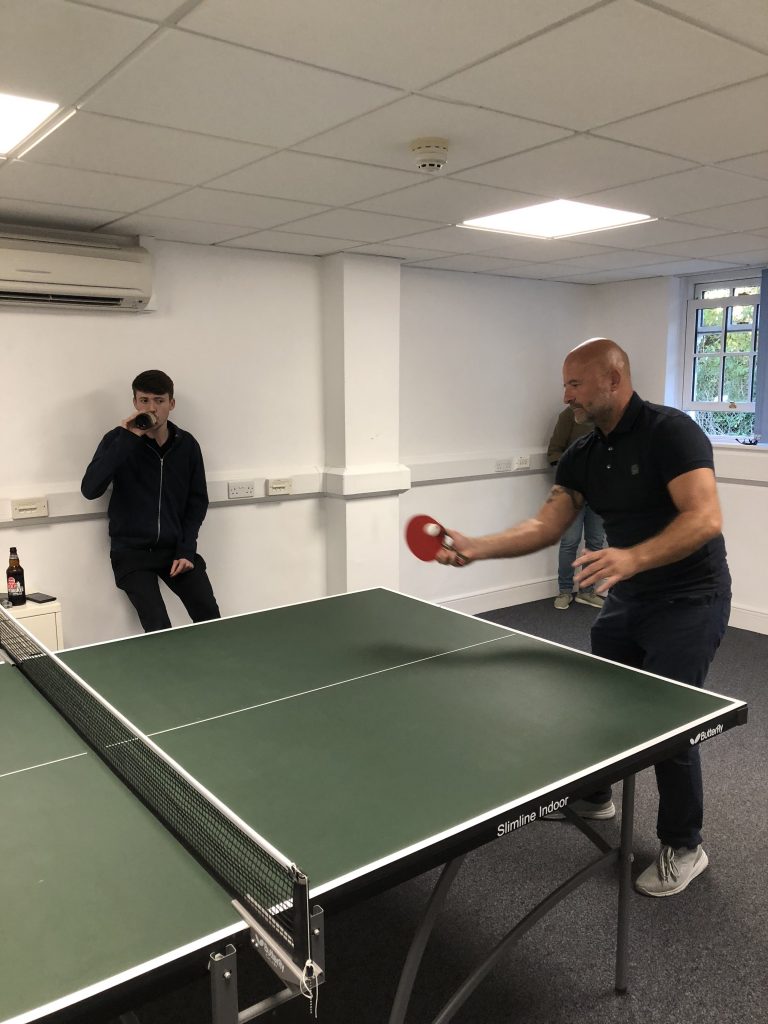 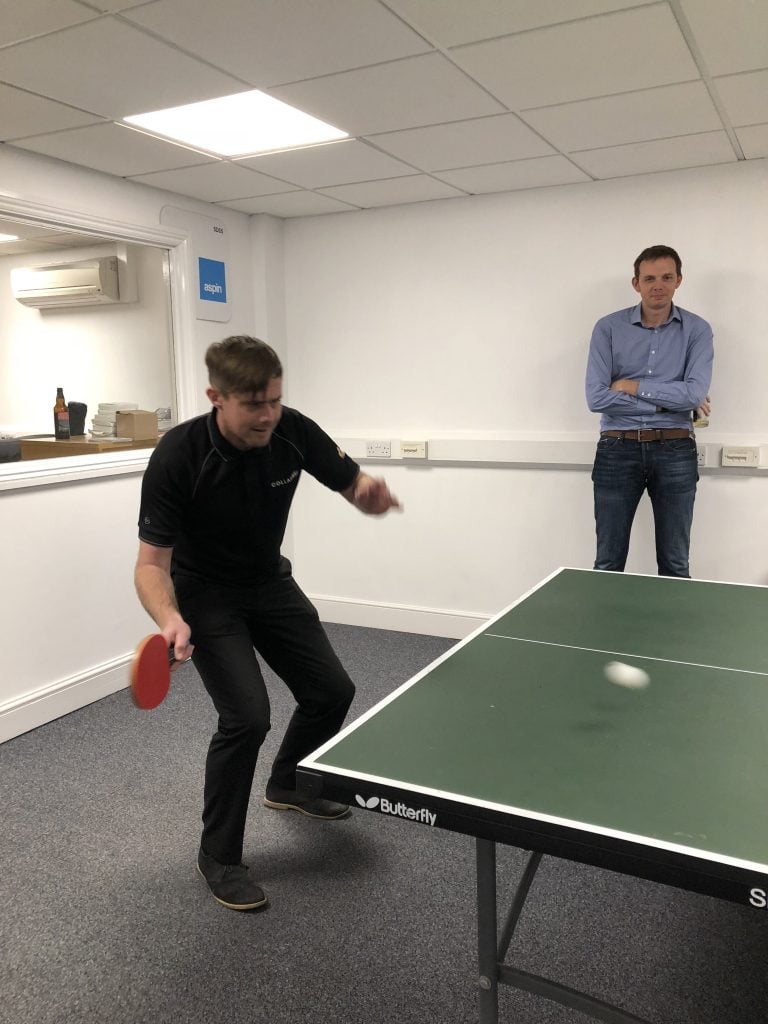 The second set for game one saw the beginning of Collate’s comeback – had Aspin peaked and exhausted too early? Ade knocked out Aspin’s Harvey – whilst Louis, Richard, Nathan and Doug remained undefeated. Collate then released Mark and Martin who went on to win both of their second set games. With multiple cases of 1-1 after set two, Collate backed two decider wins to take them onto the next singles game. Whilst each tense moment was dispersed with a round of Heinekens, multiple bags of popcorn and crisps and empty threats, Aspin wondered whether their strong start lay in jeopardy, as Collate crept back up the scoreboard. 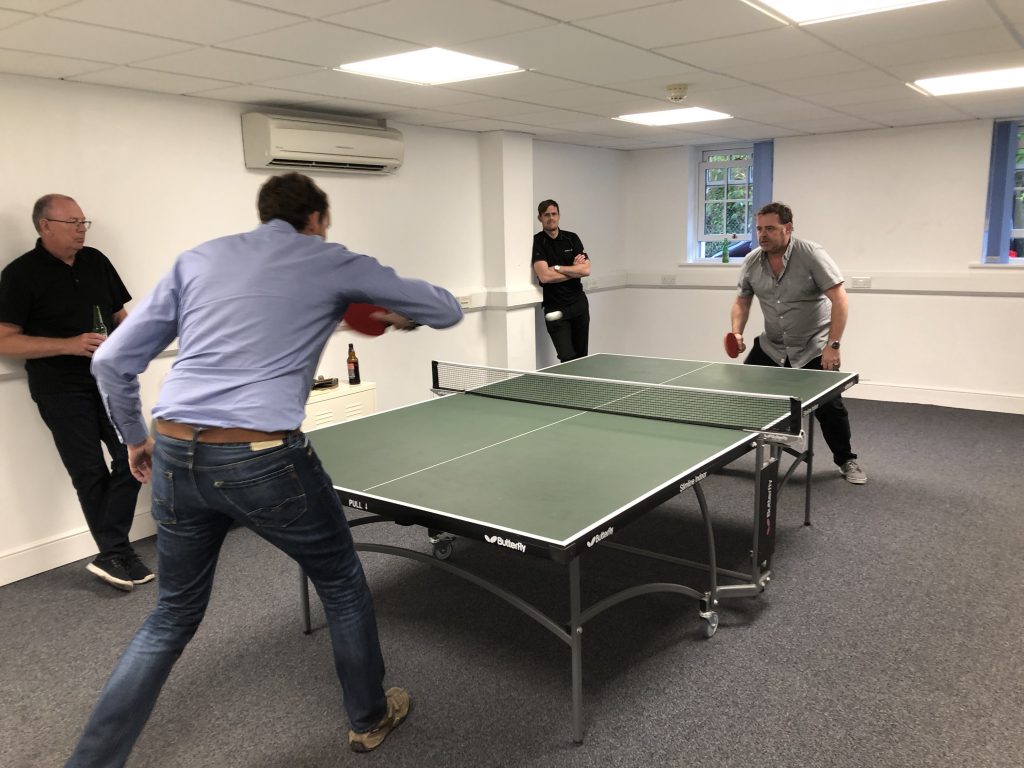 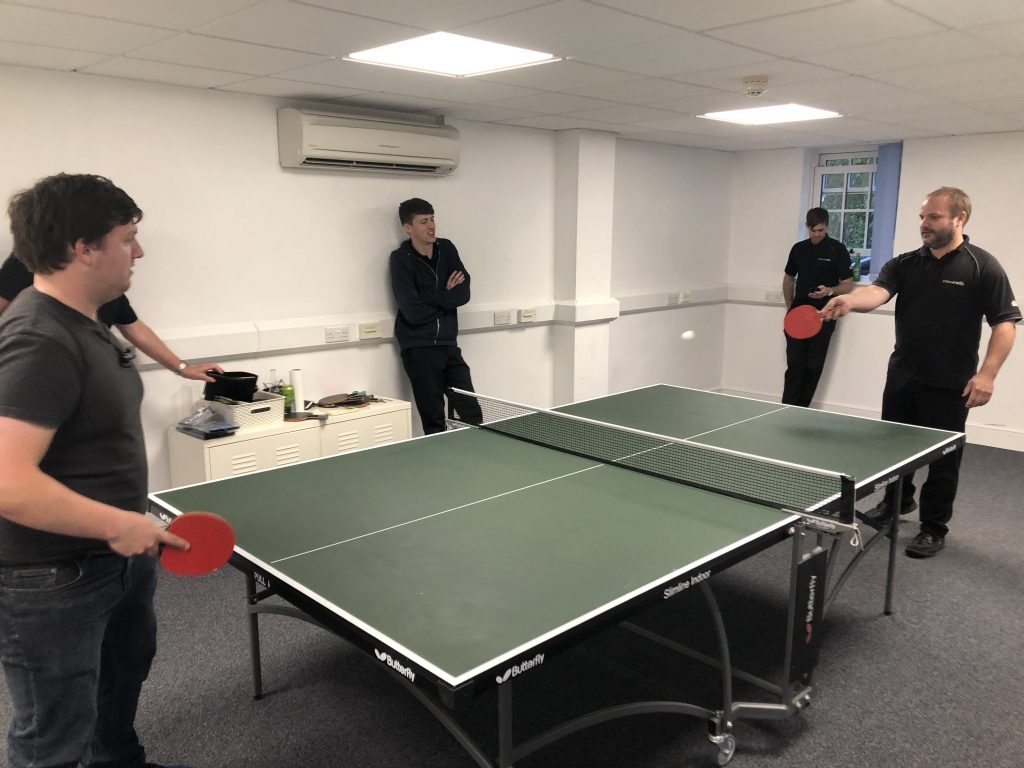 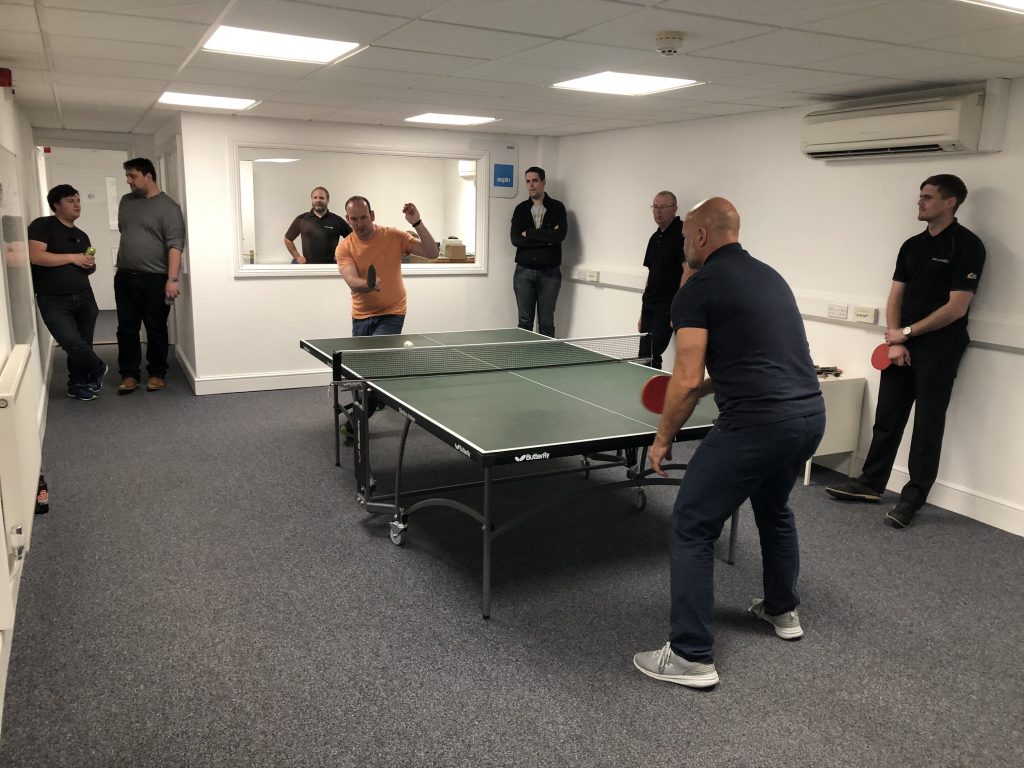 Richard for the win against Collate’s main man

Game two was rich with equalisers – which quite often meant playing a third deciding set to finish the round. Collate won the second game with victories from Mark, Martin, Ade and Simon – whilst Aspin finished the singles round with fewer victories thanks to Doug, Richard and Louis. Tummies were beginning to rumble, temperatures were rising, all that sat between both teams and their curry was now the doubles game. With Aspin winning the first singles round 4-3 and Collate winning the second singles round with 4-3, doubles was sure to be exciting…

First up, Collate’s Mark and Simon took a win over Aspin’s Nigel and Doug. With Aspin on the back foot, Richard and Nathan were under pressure to pull it back against Colin and Martin in the next set. The promise of onion bhajis drove Nathan and Richard into first place, taking home a win for Aspin. The final set put immense pressure on Ade and Harrison to win the overall tournament for Collate and likewise for Chris and Louis for an Aspin homewin. It was a close call, but Aspin took the glory!

Biggest congratulations to Aspin for bringing it home last night – and Nathan didn’t even have to wear a waistcoat for the win. 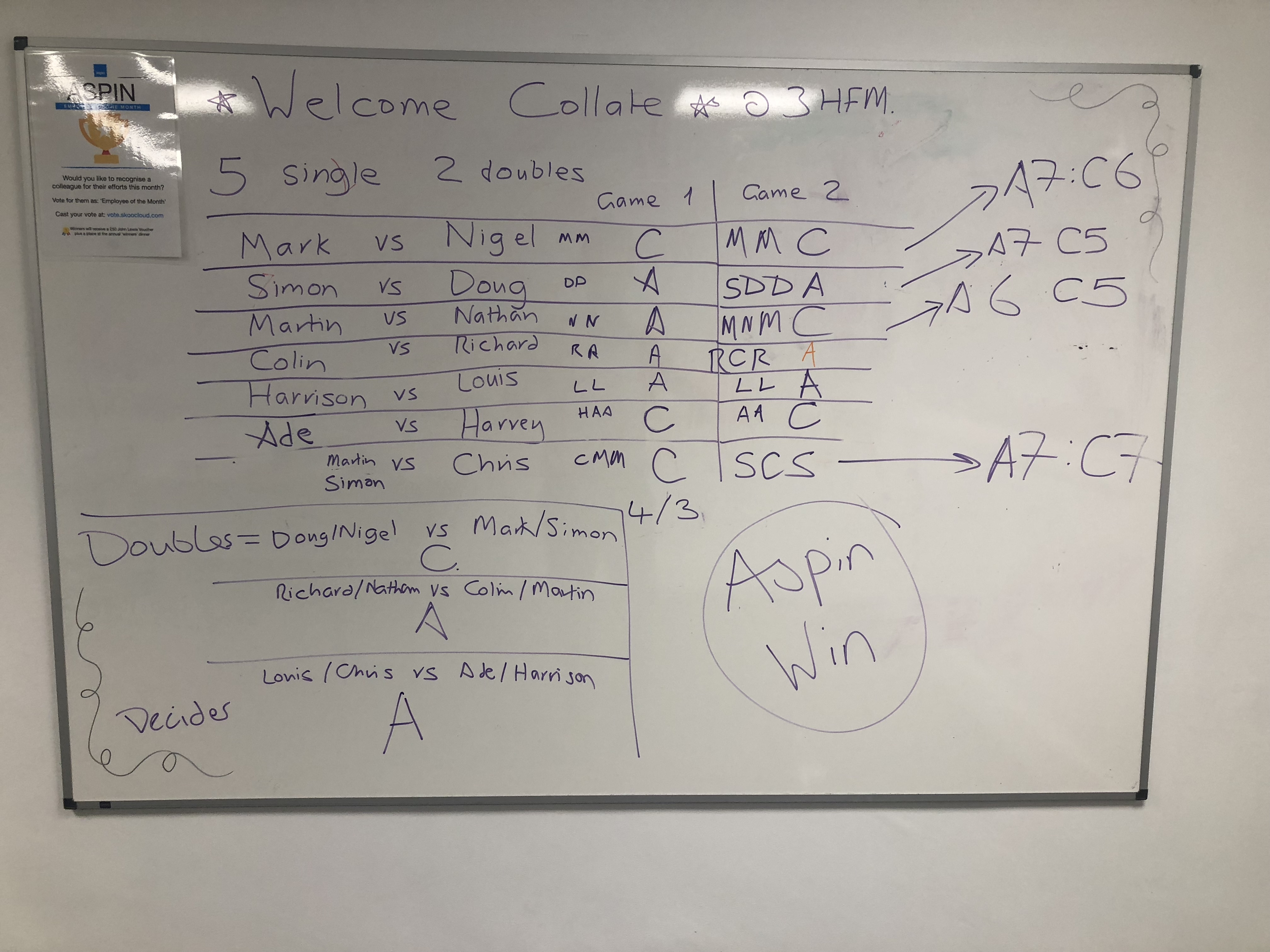 Thank you to Ringwood based Collate for a great evening – see you soon for the next tournament!

Aspin help distributors take orders more effectively. Our innovative and user friendly applications allow sales teams, agents, and retailers to place and process orders wherever they are. From 1984 to present day, our product range has evolved with technology available to our PixSell iPad ordering app and InterSell B2B eCommerce websites.